How many times have you heard the parable of the lost sheep? It was one of the stories from my earliest memories. When I was a child, my parents bought me a set of delightful books, Arch Books, that presented some of the greatest Bible stories in full color. The shepherd in the story-book was named “Jon”…just like me!—Jon and the Little Lost Lamb. I believe I read that book over and over and over.
As an adult, I still love to hear the story of the lost sheep (found in Luke 15:4-7 in the New Testament):
“Suppose one of you has a hundred sheep and loses one of them. Doesn't he leave the ninety-nine in the open country and go after the lost sheep until he finds it? And when he finds it, he joyfully puts it on his shoulders and goes home. Then he calls his friends and neighbors together and says, ‘Rejoice with me; I have found my lost sheep.’ I tell you that in the same way there will be more rejoicing in heaven over one sinner who repents than over ninety-nine righteous persons who do not need to repent.”
The parable is lovely…the rescue wonderful.
As an adult with good, modern leadership training, I can’t help but think things through to the next step—I’m a ‘problem solver,’ so let’s solve this! Okay, so the Shepherd has a problem with wandering sheep? The answer, of course, is logical—build an enclosure. With a simple fence, the sheep won’t be wandering off. The Shepherd won’t have to waste important time chasing lost sheep who knows where. The 99 need not be abandoned for the foolishness of the one who doesn't know his or her place. I mean, there is already a night enclosure; why not a day enclosure as well? No more lost sheep. All’s well that ends well. End of story.
But wait. The Shepherd once recognized every sheep…knew the spots and peculiarities of each sheep. Before, He knew the bleat and baa of each ram, ewe, and lamb. He counted and recounted the sheep…slept among the sheep…played His lyre or flute for the sheep. If the sheep ran off, He knew where they probably were…and went after them until He found them
Not anymore. What happens to the Shepherd now? His real concern now becomes the fence. His work becomes maintaining the fence. The attention is now on the fence…the quality and solidity of the posts…the integrity of the wire…the possibility of holes. Time is spent replacing posts, repairing fencing. Instead of walking among the sheep, the former Shepherd-turned-‘fence tender’ is walking the perimeter, eyes on the fence, back to the sheep. If he’s strolling the outside of the fence, the sheep are just something in his peripheral vision.
So, the Shepherd in Luke 15 never considers a fence. He rescues the lost sheep, returns her to the fold. The next day, He again takes the flock out to the green pastures where He watches them…and watches over them. He gives His sheep the freedom to wander, to roam…and to return. He focuses His life on His sheep…to know them by name…to recognize them from afar. He looks for one lost sheep after another so they can have the freedom of a fence-less life and the joy of knowing their Shepherd. The sheep know their Master’s voice. They go to Him, and He scratches their heads, behind their ears. He pulls out His flute and plays that same simple tune they've grown to know and love. They feel safe with Him. Yes, they place their trust in their Shepherd…not in fences.

Are We Born Good or Bad?

Often times in my classes, we begin to discuss those questions that deal with ‘worldview’ and ‘ultimate reality.’  The questions usually begin to surface when I suggest that our perspectives and understandings of the world are built on the foundation of our ‘presuppositions’—those underlying beliefs that we bring to every situation or question.  For instance, we have all have presuppositions about humanity.  I ask my students, “Are people, humans, basically good or basically bad?”

How we answer this question will inform how we deal with others, what we expect of people, how we raise our children, etc.  If I presume humanity to be basically good, then I’m horrified at the Columbines, Auroras, Newtowns and city buses of New Delhi; if I presume humanity to be basically bad, then I’m not terribly surprised by the horrors of humanity (or at least I shouldn’t be!)

But, is there another option?  After we have debated and fleshed out the good or bad perspectives in my classes, I raise a third perspective (presupposition)—humanity is not good or bad; people are born selfish, self-centered.

Anyone who has ever had children will recognize it in a moment.  Children really aren’t morally good or bad until they are old enough to make conscious decisions regarding themselves in relation to others.  BUT, from the moment they are born, they are absolutely self-absorbed, self-centered, selfish.  They want milk…and they want it now.  Then, they want attention.  They want praise.  They want…want…want.  The children don’t just ‘grow out of it’ – just take a three-year-0ld up and down aisles of Toys-R-Us or even just a local grocery stores and you’ll hear it—“But I want….!  Waaaaaaaa!”  I even hear it from teenagers…and, lamentably, from adults as well….

If individuals are selfish, then groups of individuals would develop a “group selfishness”…and we see that as corporations seek market control, political parties push for their party line, as governments push for patriotism and nationalism.  In fact, if we look at many of the problems today—from the small and local to the big and national, we can trace the origins of the problems back to good, old-fashioned selfishness and egoism.

I believe that the Christian Scriptures recognize self-worship and self-importance as the greatest problem with humanity…and call for self-emptying as the highest act of faith.  Jesus taught his followers, “Greater love has no one than this: to lay down one's life for one's friends” (TNIV).  The very greatest love one can have is to commit a selfless act. Jesus even 'walked the talk'...right up to an agonizing death on the Cross.  If that is the greatest love, then the opposite—the worst thing one can do—is to pursue selfishness.

Are people basically good or basically bad?  No…we are basically selfish, and the great human task is to train the coming generation—and move ourselves—to look beyond ourselves, to think of others.  The life of following Christ is the only way that takes us there.  Through Him, we learn to lay down our lives...as He laid down His own.
Posted by Wilderness Wonderings at 11:16 AM No comments:

Youth is not a time of life—it is a state of mind;
it is a temper of the will, a quality of the imagination, a vigor of the emotions, a predominance of courage over timidity….
Nobody grows old by merely living a number of years; people grow old only by deserting their ideals.
Years wrinkle the skin, but to give up enthusiasm wrinkles the soul.
Worry, doubt, self-distrust, fear and despair—these are long, long years that bow the head and turn the growing spirit back to dust. 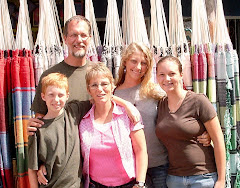