Wise as Serpents...Innocent as Doves

In a technical sense, I am a missionary. I am one of those set aside by the Church and commissioned to serve outside the immediate community of my local church, in a cross-cultural setting. I know this. However, I almost NEVER introduce myself as a missionary. Why is that?
In October this past year, I had the wonderful honor and opportunity of attending an international conference that our sending-agency held in Prague, Czech Republic. I boarded the plane here in Monterrey for the first jump to Atlanta, GA. The plane was almost full, and I was seated in the last row...with a woman from Monterrey. She was probably in her mid-to-late 40's. We exchanged greetings...and began to chat. She, I learned, was on her way to Italy for the vacation of a life-time, was going to meet her boyfriend there for a two-week stay at a luxury villa. We talked about Monterrey...the changes she has seen...the education system...our families...and a bunch of other things.
At the beginning of the conversation, when she asked, I introduced myself as "a professor." After all, that is what I DO...I'm a missionary serving as a professor at the John Wesley Seminary. Throughout the conversation that happily (for me) filled the 2-hour flight to Atlanta, I gradually revealed my connection to the Church...and some more aspects of our work and ministry.
As we touched down in Atlanta and were standing to gather our stuff, she turned to me and asked, "So...are you like a pastor or something???"
I responded, "Yes, I'm a Methodist minister teaching at the seminary."
If I could have captured the look on her face! She said, "I can't believe I talked with an evangelical pastor all the way from Monterrey to Atlanta!!" She then turned to the fellow who had been seated in front of us and said to him, "I can't believe it--I talked to a pastor all the way!!!"
If I had sat down from the beginning and introduced myself as a pastor and missionary, I am certain that it would have been a very quiet and uneventful flight from MTY to ATL.
Of course, I'm not "ashamed" of who I am or what I do--far from it. I love what I do. However, I also know how people react to what I do. For me, it is much more important that I keep doors of communication open. Announcing my religious vocation tends not to be a great door opener!!
As a minister and pastor, I have no problem introducing myself as an educator, community development worker, or leadership consultant. These all fall under what I do as a pastor/minister/missionary...and most important of all, in our culture here that generally holds Protestant/evangelicals in suspicion and at arms-length, presenting myself in one of these innocuous roles keeps the doors of communication wide-open so that relationships can develop...and discipleship can begin.
This way of living, I believe, is what Jesus meant when he said we are to "be wise as serpents and innocent as doves (Mat.10:16). I hope that the lady on the flight to Atlanta is still telling that story, of how she talked for almost two hours with some "evangelical pastor." Our gentle, non-confrontational interaction just may have laid the groundwork for someone else, for another passionate Christian to come along and now find an open door to evangelicals in her life.
"I am sending you out as sheep among wolves; therefore, be as wise as serpents and as gentle as doves" Matthew 10:16
Posted by Jon Herrin and Family at 6:55 AM 1 comment:

The JAM...and She Did it AGAIN!

Well, looks like the Megan is really going for it all this year!
This past trimester, Megan participated in the annual speech competition. And, she took 2ND PLACE! Her topic was "Understanding the difference between needs and wants." Go, Meg, go!
Then, when the academic reports came out this past week, she also learned that she is 2ND in her class academically!! What next will this girl do!! We are so proud of her.
Of course, the rest of the JAM are doing great as well--Jesse holds 1ST PLACE in her class...and Andrew is sporting all A's!!! Not that I'm a proud father or anything, but these Herrin kids are doing great!!
Posted by Jon Herrin and Family at 5:50 AM No comments:

The Swine-Flu in Monterrey...

You have seen it in the news...and seen it, and seen it! So, what is it like here...on the "front lines," so to speak?? Tough...but not nearly as bad as it could have been!
We were very happy to see the Mexican government become so pro-active as soon as it was clear that there was a very present danger in all of this. One of the first things the government did was encourage people to avoid social gatherings. And they followed that almost immediately with the closing of all schools, theatres, sports events and even religious gatherings. Restaurants in many areas were limited to "carry-out" only. From Monday, April 27 through Wed., May 6, our city was kind of like a ghost-town.
People really did all they could to avoid being outside among others in a effort to stop the spread of the influenza. We did our part to comply with the government wishes, staying in-doors most of the time, watching movies on DVD and reading books. We communicated with our friends here through phone calls and e-mail, taking every opportunity to encourage them.
Many people here live in fear...and this influenza certainly touched that part of their lives. Some folks were terrified...and all the hype about "the Spanish Influenza" of 1918 didn't help! So, we understood that part of our ministry was to quell fears, offer hope...to be a "calm in the storm."
Thankfully, the government's measures seem to have had a positive effect. With everyone home watching television and listening to radio, the government was able to bombard the population with flu prevention measures they could take, and basic anti-flu hygiene (wash hands, wash hands, wash hands!) While there are new flu cases appearing, things are not nearly as bad as they could have been.
All in all, while it certainly has not been easy time, the Lord has shown himself to be faithful through the calming presence of his Spirit. Please continue to pray for Mexico as the people wrestle with long-held fears and superstitions. And, pray that we can be the "calm in the storm" that they need.
Posted by Jon Herrin and Family at 5:30 AM No comments:

On Saturday, April 4, a youth mission team from the Calhoun First UMC in north Georgia arrived to work at the John Wesley Methodist Seminary and to minister with the San Pablo Methodist Church. The fifteen team members--five adults and ten youth--arrived full of energy and enthusiasm...and it didn't diminish the entire week!!!


Sunday morning we went to the San Pablo church where we worshiped together and Pastor Brian from Calhoun preached. After the service, we gathered on the roof of the church (soon to be the new sanctuary of the church) for lunch--rice, beans, beef stew and nopales (stewed cactus!). After eating together...the church had games planned--and it was a blast to see the American young people who spoke no Spanish playing, dancing, and laughing together with the Mexican young people who spoke no English! Indeed, there is much in our life of faith that goes beyond language! 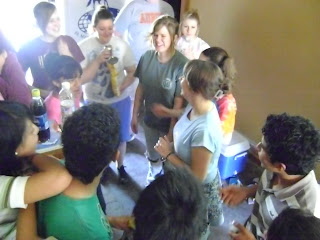 Monday morning we hit the seminary at full tilt, taking over where the Asbury UMC (Tulsa, OK) left off in replacing the first floor of the seminary. About six of the youth from San Pablo joined us all as we pulled up the old floor, put down the new flooring, laid the tile, painted the walls, stained and put down trim.... It was a lot of work, some of it quite tedious...but we all pulled together for a wonderful finish. 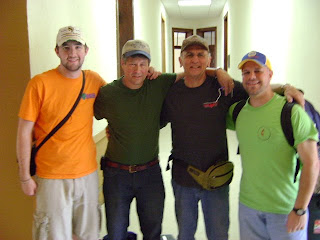 In the afternoons, after a late lunch and a little rest, we went over to the San Pablo church for afternoon Bible schools. The children were wonderful...and the youth from Calhoun put together some rather creative story-telling to share the Good News of the Bible. Our children--Jesse, Megan and Andrew--did all of the translations for these Bible Schools, and did a GREAT job.
Thursday night, we joined San Pablo for a Communion Service...and for the "Good-Bye." After only one week together, wonderful friendships had already been forged...and many tears we shed. The Calhoun Youth and the San Pablo Youth overcame the language barrier through that greater universal language of love. Even though we all said "good-bye" that evening, it wasn't over yet! When the Calhoun team got to the airport to leave the next morning, the San Pablo youth showed up there...posters and pictures in hand...and they sat in the airport and sang a farewell song for the Calhoun team. Another time of tears and good-byes...and the Calhoun team had to go to the gate. 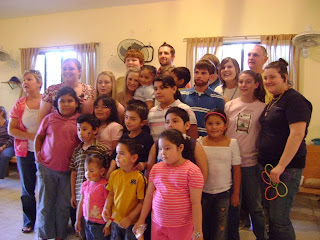 Of course, we laid a beautiful floor at the seminary...and we taught children the eternal stories of Scripture--but the greatest part of the trip may well have been the relationships that were formed between people of differing lands, cultures and languages. Both Calhoun and San Pablo will never be the same, all because 10 teenagers (and five adults) in north Georgia gave up their "Spring Break" to travel to Monterrey. Thank you, Calhoun First UMC...for coming, for giving, and for sharing your love and the love of God with us here!
Posted by Jon Herrin and Family at 5:17 AM No comments: